The Wave is 6 m long and 2,5 m tall construction cut in mass wood.It consist of ten individual pieces of equal size, set togeter to form a wave. The equal pieces are fasten to the wall, in different distance from it, in variation from 3 -10 cm. This makes it look like a relief, like layer on layer. All the pieces are painted white on the front and blue on the back . Words, also cut in mass wood, is hanging from the wave, forming  a little text. All the remains from the cut out, is asamblet in front of the wave on the floor, situating a positive/ negative dialog.

02 Is a pic of the remains that is cut from the wave itself.

The Wave is the first exhibition in The Walden Trilogy, which main concept is to represent and reflect nature in different levels. The wave representing the liquidity of time, the flow and the  flux, everything that moves. The  Wave seen as an ongoing eternal power. But the movement of the wave seem to be an image of a lot of things in our human life too. The way a life is put together with ups and downs, with economic and political situations,The Wave moving, changing from one situation to another. Nothing seem static.

The Wave is not nature, but simple static representation. It is cut out like a relief, like in a scene to a play on a theatre. A kollos caught in time, frozen in a glimpse of a second. On the edge of ebing more cartoon, drawing, than a symbol of a real wave, a paradox and a contradiction in time.

Its an important issue, that the actual construction of the trilogy, is handmade by me personaly as an artist. For me the idea of beaing an artist is to bring a kind of " language" directly from one person to another, without any interferringfrom outer parts. By doing that I devoir all kind of heracic order in the artistic life. 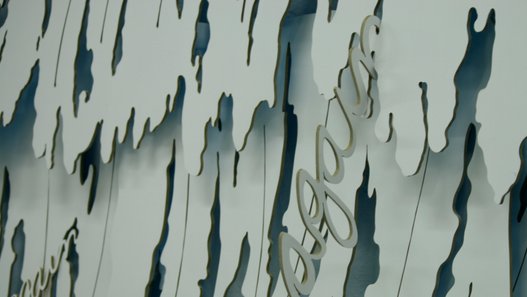 03 Is a close up look along the side of The Wave showing the words hanging from it, an the distance between the different levels. 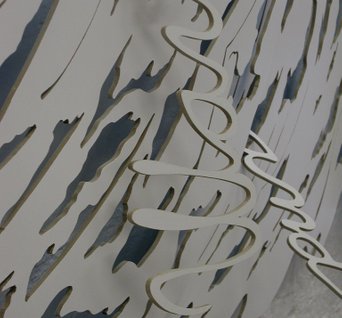 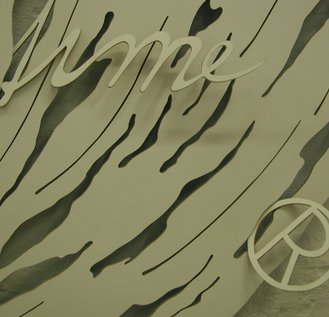 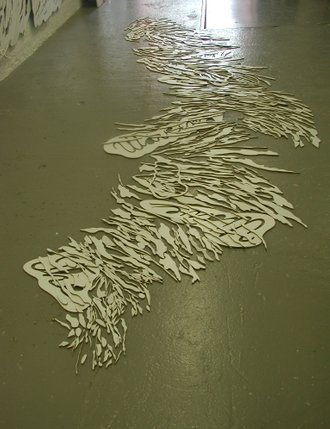 04 and 05 Is showing close up view on the wave. The letter R at 06 indicate the well know trade mark for a registrated compagny. R also stands for  to be. 06 Is the cut out pieces from the wave placed at the floor.

06 Is the cut out remains from wave placed on the floor. 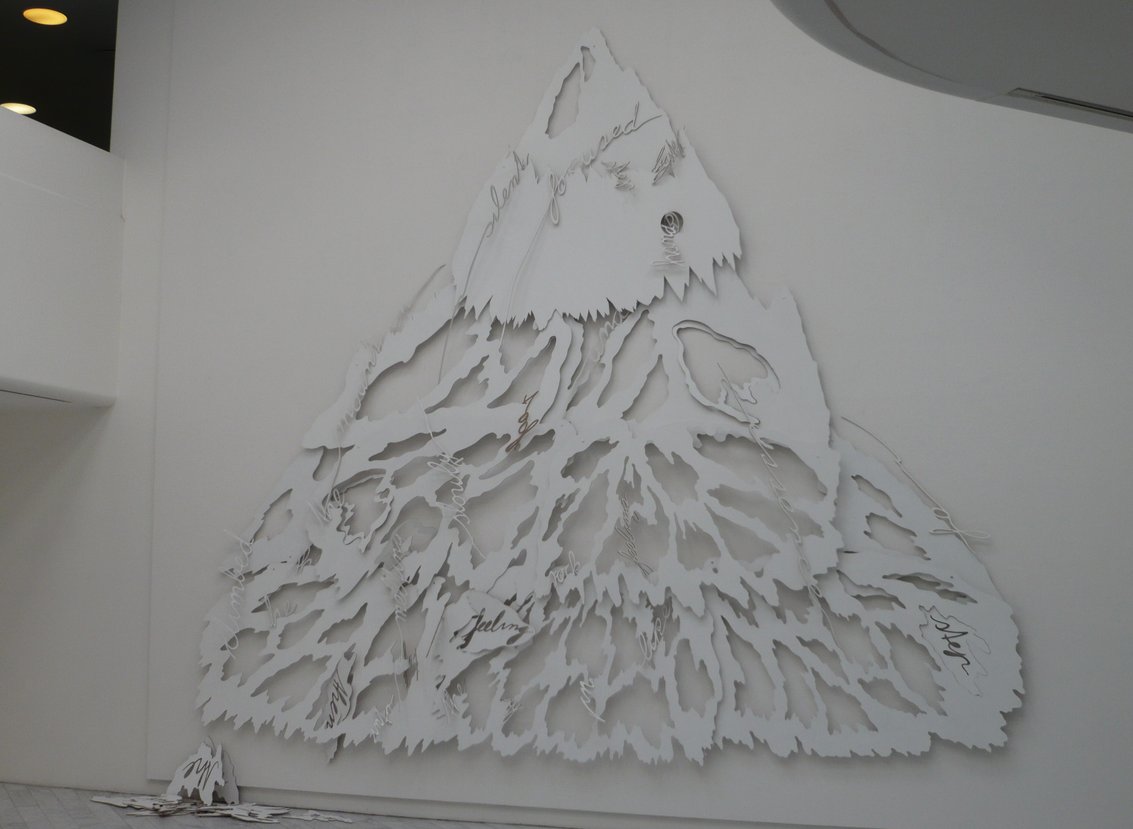 Calling card for the exhibition

01 A frontal look at the full mountain in the gallery.

The Mountain is a 6 m long and 5m tall relief, cut in mdf, mass wood. It consist of 11 pieces in different size and shape, to form a mountain. The pieces are fasten in different distance form the wall, in variation from 2 -10 cm. This form a relief i five different layears. The inner pieces cut from the mountain, are placed by the foot of it, and  on the mountain itself, now containing words, a short line of text. Another text is placed a the nearby walls, a declining line, towards the  mountain, as a  starting point to the climb. 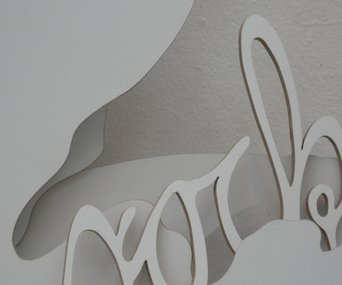 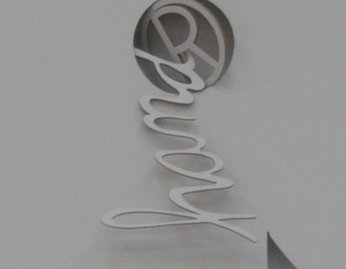 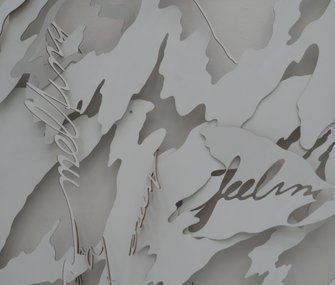 The Mountain is the second part of the trilogy  "The Walden Project". With the Trilogy I try to reinstall nature in a new constallation, by setting it up in a spectacular volume. The idea is, why we as humans  try to understand and  comprehend the  scale of nature, the nature seems to catch up with us. While we physically and mentally try to concure the Mountain by climbing walking or looking at it, the mountain is slowly melting down on us. A kind of double process. The more we want to understand and overcome nature, to posses it, the more  we seem to be possesed by it and become implicit, piece by piece.  This is becomming visual by the new little mountain, slightly formed by the pieces falling out from the mountain. Within the flakes, that makes the new mountain, is the negative  shapes of the words, but now forming a   completely new different aganda. 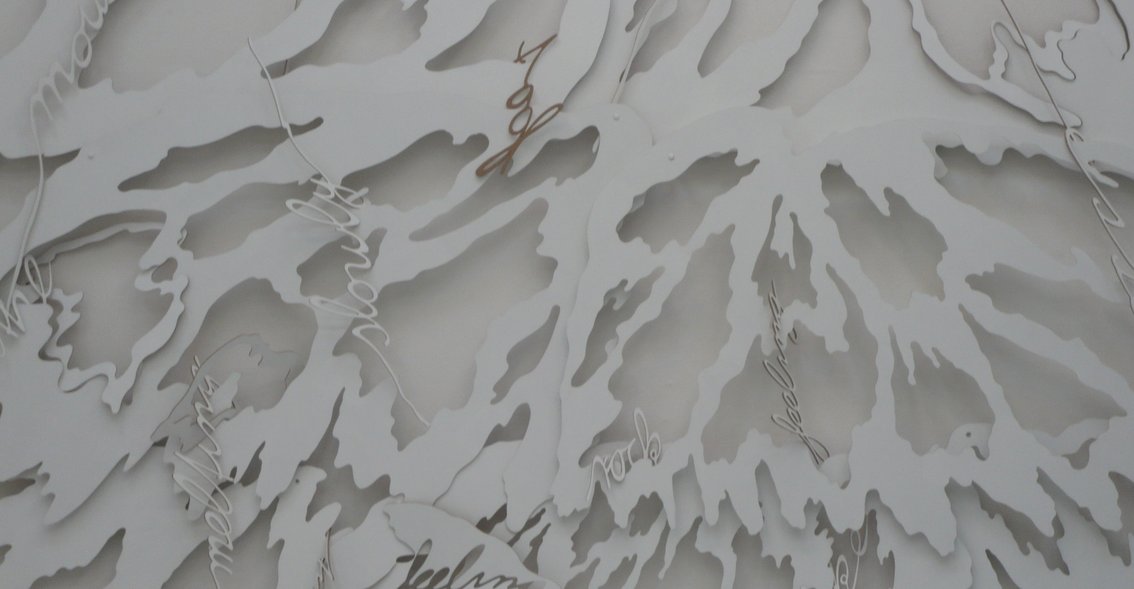 05  Close up pic. showing the center of The Mountain, with the words thumbling around.The full text on The Mountain is: 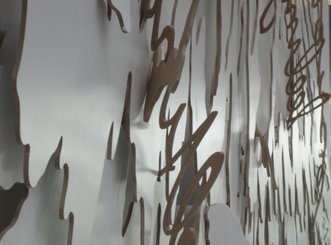 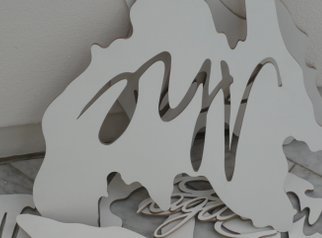 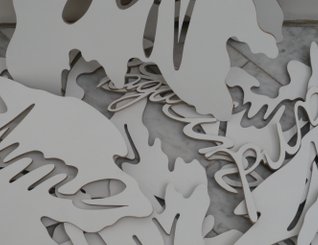 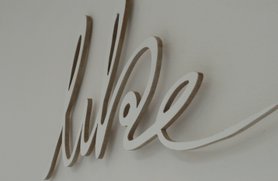 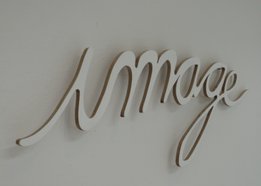 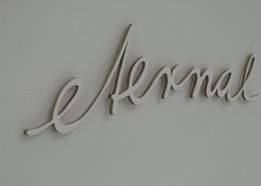 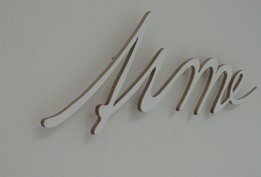 Photo no. 09 - 12 are showing the words from the text on the wall beside the mountain, the words are cut in mdf mass wood like The Mountain.The full text on the side wall  is:

06 and 07 are close up pics of the Little mountain  forming up in the corner.

02 Showing the word " Cabin" and the top of the construction.

Exhibited at the exhibition space Spanien 19b, AArhus DK, 2010

01 A view into the cabin, showing remains on the floor

The Cabin is the third exhibition in the trilogy, The Walden Project. The Cabin is placed in the middle of the exhibition place, having the same size and mesures, as Thoreaus original cabin at the Walden Pound. It consist of 25 " sticks" with text line lines in a book.All the lines are cut in mdf mass wood and placed virtical standing upon The Cabin. The Cabin itself is made with similar sticks, wich lines up the whole contour of a building. A random of words are cut out and placed on the floor, inside the Cabin. The words are a mix from the two  previous exhibitions in the trilogy. All is painted white on one side and  originla structure and color on the other, making it a dark and a light side. 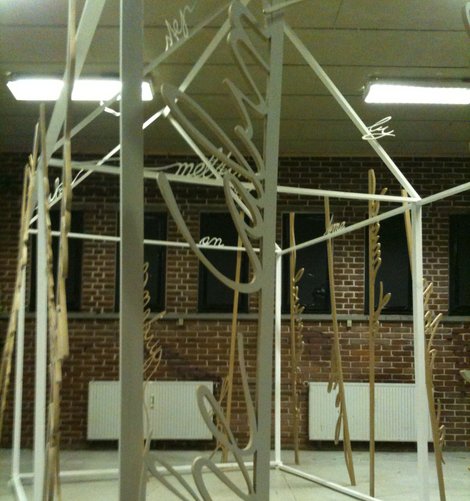 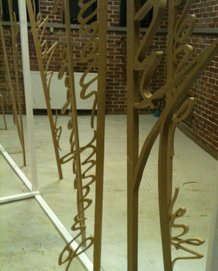 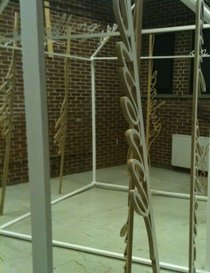 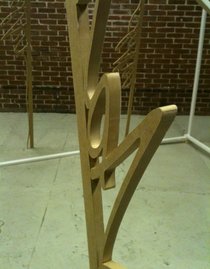 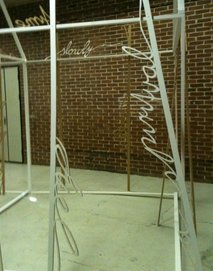 The Walden Project is dealing with nature as the clear force it is, something that is there and beyound human touch. The idea is to show that we as human,s cant seperate  ourselves from nature, we are nature. There is no possible way that we stand outside nature.

The two previous shows in the trilogy, weere organic structures and elements from naure, but the Cabin is a human made construction,with the function of a shelter.  At first the show seem to be showing a Cabin, but with a closer look  , its becomes clear that it is only a fragment, a frigile structure, a simple frame of a cabin, more silhuet  drawing  than real cabin.The idea is to visualize the fragility of man,the thin line between inside and outside,  inside being the civilized outside nature. Which is the whole difference in how we  survive as humans. And yet the paradox, that  all we actually need is this humble cabing, this thin structure, to be able to develope and become civilized.

And maybe all that protect us, is the ability of speaking and writing, the word is unmistakenly   human. The thin written words of The Cabin  symbolize that. It is placed upon The Cabin as if is an unspoken code, a spell  that only we can understand. The spell that keep everything in place. The Cabin is a hymn to the word, to the spoken language of humans.

03 - 06 Is different angels of the thin lined Cabin, silhuet up against the pattern in the brick wall